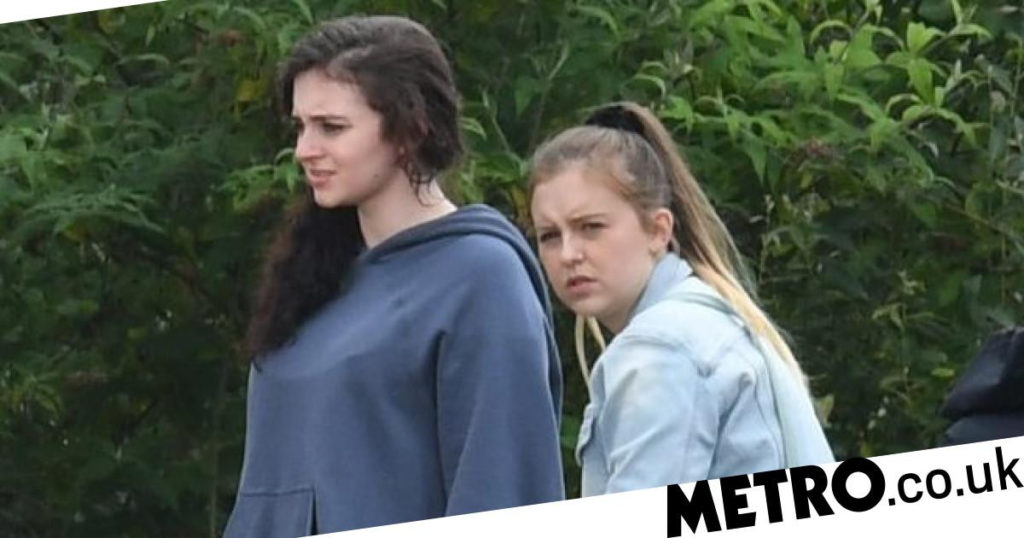 Coronation Street stars have been spotted filming further scenes as the hate crime murder against Seb Franklin is explored via flashbacks.

Earlier today, Metro.co.uk revealed Harry Visinoni’s return to set alongside Mollie Gallagher, who plays Nina. It is anticipated that flashbacks will confirm the full truth about Seb’s death as Nina was dressed in goth attire.

New pictures show Mollie and Harriet Bibby, who plays Summer Spellman, filming on location ahead of flashbacks; with Nina appearing without her make up and signature fashion sense.

The picture implies that Nina and Summer will revisit the scene of the crime before flashbacks prove who exactly is responsible for the death of Seb.

Corey Brent (Maximus Evans) is prime suspect, although Kelly Neelan (Millie Gibson) has been incarcerated for her part in the attack.

In between filming, Mollie and Harriet enjoyed a laugh, with Harriet showing off her dance moves.

Seb was murdered after he and Nina were brutally attacked with the motive being an intolerance and hatred for Nina’s subculture.

Nina has since blamed herself for Seb’s death and ditched her identity as a goth – and pictures also recently showed Corey attending court, implying the story is set to become a prime focus over the autumn.

With it seeming inevitable that flashbacks will fill some gaps in the night of horror, will Nina be able to shift the blame from herself to the true culprits?

And just what will be revealed about Kelly – how was she involved in the fatal final moments of Seb’s life?

The storyline is building to a trial for Corey – but will he face justice or escape a prison sentence for his crimes?

The scenes are expected to air this August.

If you’ve got a soap or TV story, video or pictures get in touch by emailing us soaps@metro.co.uk – we’d love to hear from you.

Join the community by leaving a comment below and stay updated on all things soaps on our homepage.

Includes exclusive content, spoilers and interviews before they’re seen on the site. Find out more »