How do older Goths age successfully? 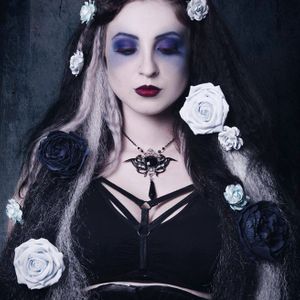 ‘darkwave’ music. This event presented an eerie looped video of Robert Smith playing a song from the Cure, “A Forest,” which was a departure from the black cat’s usual cinematic experience.”

A black cat, cuddled by the event’s emcee, was propped next to the turntable of DJ Stephen Petix.

Observing the ceremony from her Baltimore home, 38-year-old Leah Bush, a Ph.D. student in American studies and anthropology at the University of Maryland, College Park, has documented several local Goth traditions since 2014.

As Bush explored through her Master’s thesis and here in her book, there is a better, more Goth way to age and triumph over life’s many challenges.

Before defending her dissertation later this year, she attended virtual Goth parties in a final round of field work.

She stands out in Goth studies in her focus on “elder Goths,” just as her academic background sets her apart in her side venture, which was her primary source of income before moving to the US.

In the words of Bush and her co-authors in Goth Studies, so-called elder Goths — who came of age with Goth music decades ago — possess a road map through life that is lacking for fans of more youth-driven music.

Bush tells me that the music focuses on universal themes rather than youth. It is lyrically more expansive than most mainstream pop music. I keep hearing a lyric from the opening of the Cure’s ‘Pornography’ album: ‘It doesn’t matter if we all die.’ ”

This has been confirmed by Bush’s subjects. There’s a goth who’s also an Anglican priest who sees no contradiction between the two callings. Jesus, he says, was the most countercultural figure ever to have lived.Goth bars are second only to queer clubs in their acceptance of androgyny and gender play, with male leather jackets for men and female velvet robes for women.

Goths promote their ability to express multiple emotions, including sadness and fear, according to another of Bush’s informants, Neska, a prominent DJ in the Baltimore darkwave scene. As a whole, darkness and light work in harmony to create a healthy individual and quality of life. Without darkness, we wouldn’t appreciate light.”

In order to fulfill their dreams, many of Bush’s elder Goth friends — mostly in their 50s — had to choose between going out into the nightlife or obtaining higher education and motherhood.

Bush believes “Goth has become a way for people to stay happy — even though their lives aren’t perfect.””

It may seem rather oxymoronic to say that goths are “happy old,” but that’s exactly the point. According to Bush, the secret to their longevity lies in the fact that they have the ability to combine opposing, seemingly paradoxical energies.

For instance, Goths’ emotional intensity can offend some, Bush says, but their willingness to harness dark emotions such as despair, gloom, and hopelessness, rather than repress them, can be healthier in the long run.

Also essential is Goths’ ability to find humor and irony in supposedly ugly sources such as flowers that grow by a cemetery or a frailness in an aging body.

The question here is: Why not own the cultural sexism that surrounds older women and become the world’s greatest grand dame of darkness?

The most important aspect of the subculture is the sense of community, according to Bush.

According to one older Goth, they like their ability to overcome other-worldliness: As she puts it, they’re grateful to have a scene with people their own age and maybe a bit older, who are still finding themselves.

As she hopscotches the world’s virtual Goth nights, what Bush has noticed inspires her: “We’re finding new ways to connect with each other.”

The night’s set list included plenty of death, but it also included dancing, pageantry, and even life. One attendee wrote in that it had been “the best hour of my week.