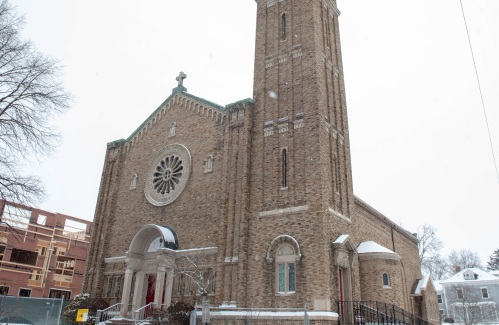 St. John Cantius (SJC) Church is in the American Romanesque Revival style of architecture that was in fashion, along with the American Gothic Revival one, in the late 19th and early 20th centuries, but was much less common than the latter. The original Romanesque architecture developed, beginning c. 1000, in Burgundy, in France. It took ancient Roman arches. columns, and pillars as its points of departure, with the “barrel vault” as its ceilings and roofs. A “barrel vault” is shaped like a wine barrel cut in half from top to bottom, with several halves lined up in a row on top of round arches joining them and covering the gaps, with pillars supporting their ends. The much more ornate Gothic style with pointed arches and a peaked roof became dominant in the late 14th and early 15th centuries.

A barrel vault is an excellent sound amplifier. Sound, like smoke, rises; the round surface above prevents it from going up into a peak, as with Gothic architecture, and getting lost, so it returns down for everyone to hear. This allows the pastor/priest who is chanting to be heard throughout the hall to its far end; it’s architecture’s natural amplification. There wasn’t any other option in the Middle Ages; and electrical or electronic amplification brings distortion with it.

There are several varieties of Romanesque; this one is the simplest, early form: a rectangle without any transepts (the arms on both sides with entrance doors at their ends to make the building represent a cross). You can find one that has those close by: St. John’s Episcopal church on Elm Street. It is, however, not the French type, but rather the Norman one, brought to England after the conquest by William the Conqueror in 1066.

This style was often used for chapels, or abbeys, attached to monasteries, and much less for churches and cathedrals. There were two major orders of monks in France in that period: the Benedictines, founded by St. Benedict in 529 (not a typo!), whose home base is Subiaco, in Italy, East of Rome, and the Cistercians, founded in 1098, by St. Bernard of Clairvaux, whose home base was the Abbey of Clairvaux, in Burgundy. They were often called “black monks” and “white monks” respectively, the colors of their ‘habits’ (regular ‘uniforms’/garments). The Cistercians avoided all decoration in their buildings, so there were no carved sculptures on columns or anywhere else, for example, and no stained-glass windows.

One of the most well-known Benedictine abbeys is Vézelay, in Burgundy, on a hilltop in its village, where the third crusade (known as the ‘Kings Crusade,’ led by three of them: Philippe II of France, Richard I, the Lionhearted, of England, and Frederick Barbarossa, Holy Roman Emperor, head of the German states) began. It was as unsuccessful in taking back Jerusalem from the Muslims as nearly all the others.

It is also, looking at its façade, clearly an inspiration for the main entrance of the SJC church, and was likely known to its architect, John William Donahue (1869-1941). The SJC church was likely one of his very earliest designs for the Springfield Diocese, then including the Worcester area. In the Middle Ages, there were never architects for such buildings; they were built by masons, then members of ‘guilds’ (comparable to today’s trade unions), who designed and constructed them. This guild was the ancestor/origin of the modern Freemasonry fraternal organization.

The extreme simplicity of the SJC church is very unusual; I believe it is, in fact, unique, certainly in Massachusetts, perhaps in the entire USA. Donohue likely kept in mind that the Polish community was paying for it “out of its own pockets”; the diocese was not “footing the bill.”

The SJC church would be a perfect recital hall because of its shape, size, and acoustics. It has an organ in its loft that could be used for recitals, although it likely needs some maintenance. It could double as a community hall for meetings, or for rental for weddings and other gatherings. Some existing pews could be lined up, backs to the walls, along the sides of the nave as overflow seating; others could be sold as ‘souvenirs’ to raise funds towards purchasing stacking chairs and folding tables for the more versatile usage. Its décor is simple, discrete paintings on the plastered walls and ceiling; there are no sculptures anywhere. The alcoves that formerly housed statues could be easily used for art displays. It doesn’t take too much imagination or money to make such a conversion; simplicity should be the target, as it was in 1912 for the building itself.

I do not believe that Donohue was aware of the Cistercian simplicity; it is relatively unlikely that he was or had ever seen an example. But three Cistercian monasteries in Provence are fine examples of this style: Sénanque, built in 1148, Silvacane, built in 1146, and Le Thoronet, built in 1146 near Lorgues, a replacement for an earlier structure elsewhere nearby. They are called the “Three Sisters.” Their naves are shorter than that of the SJC church, and they are made of stone.

The latter was one of the very first national historical monuments in France (whose government, since the Revolution in 1789, owns all former properties of the Roman Catholic church; the church pays rent to hold its services in them). Concerts are held there, of solo or duo vocal, small choral, and instrumental chamber music ensembles. Larger groups would overpower its acoustics. I attended recitals there, and sang in a group in it. Sénanque is still a monastery, whose monks grow lavender and make honey, sustaining the honeybees, for sale; Silvacane, being restored, is also used for musical events, including a well-known international piano festival, but when I was there in the 1970s, restoration had not yet begun. I also visited Vézelay.

Marvin J. Ward is a medievalist, with a Ph.D. from UNC-CH, and lives in Easthampton.