TikToker Dresses Up As ‘Goth Witch’ In Malicious Tinder Compliance 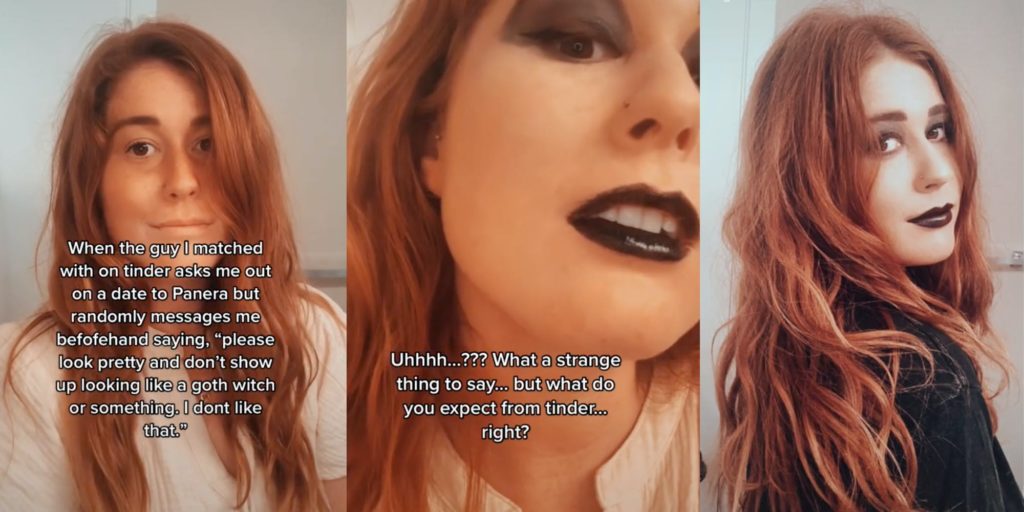 A woman’s simple defiant move has people on TikTok showering her with applause after she gave her shallow Tinder date a lesson in humility.

TikToker @meganelizabeth1016 uploaded a video detailing the very sleazy request her Tinder match made of her. After matching and chatting for a bit, the new guy asked her out to Panera for a date. Before she headed to the restaurant, however, she received a text from the guy demanding that she “look pretty” and not “like a goth witch.” Apparently, he doesn’t “like that.”

@meganelizabeth1016’s response to this absurd stipulation birthed a viral gem. Her TikTok sees her begin applying flawless makeup, complete with heavy black and grey eyeshadow, dark eyebrows, and black lipstick (well, eyeliner, but the spirit is there). The whole “goth witch” look pairs immaculately with her stunning red hair, leaving @meganelizabeth1016 looking incredible for her date. She polishes off the video with an inspiring sentiment, noting that it’s a “good thing I don’t give a F if he thinks I’m pretty.”

“I’ll buy my own Asiago cheese bagel and listen to Slipknot in a booth by myself,” she added.

Viewers were enamored with @meganelizabeth1016’s gumption and applauded her for sticking it to her superficial date in style. Even the official Panera account chimed in, as did the official Tinder TikTok. Panera joked that “people really got bold in this Panera,” before adding, “come for the food, stay for the FIERCE.”

The Tinder account quickly demanded an update, as did numerous eager viewers, which @meganelizabeth1016 happily obliged. A followup video explains that she headed to the Panera location after completing her “goth witch” look, and texted the guy that she’d arrived once she sat down. She was soon graced with a text from her date, informing her that he saw her walking into the restaurant.

“All girls are the same,” the poor, misunderstood man wrote. “I asked one thing… for you to look pretty and not dress like that.”

Then came what must have been the highlight of @meganelizabeth1016’s day. Her almost-date informed her that “I’m not coming in and being out in public with you like that so embarrassing.”

@meganelizabeth1016, via a text overlay, celebrated her would-be date’s flight with a simple: “whatever I’ll eat my asiago bagel by myself and practice my witchcraft.” She even brought along a supremely fitting wine glass, which informs passerby that “my horoscope said this would happen.”

The official Tinder account was hanging onto @meganelizabeth1016’s every word by this point, noting in a comment that the brand is “obsessed with you and your wine glass.”

The would-be date has since been dubbed “Trevor the Tool” by commenters, who are lauding @meganelizabeth1016 as their hero. Many women noted that if a man had the audacity to tell them how to look on a date he would never hear from them again.

“Look pretty? On a date to Panera,” one commenter joked. “Sir I will roll out of bed and go take it or leave it.”

Another pointed out that “that, ladies, is how you dodge a bullet.”

The Daily Dot has reached out to @meganelizabeth1016.

Must-reads on the Daily Dot